This article written by "Ahtesham Shaikh", Ahtesham Shaikh is C# and .NETtrainer, He not only writes for C# but also take trainings on C# for freshers and mid-level developers.

Below is simple sample code of delegate which is written in a normal way where "Add" method is written separately then delegate "PointerAddFun"is created. Thereafter pointer "pointadd" is then pointed to "Add" method. Finally the pointer is invoked and given values perform add operation then results are displayed on the console prompt. 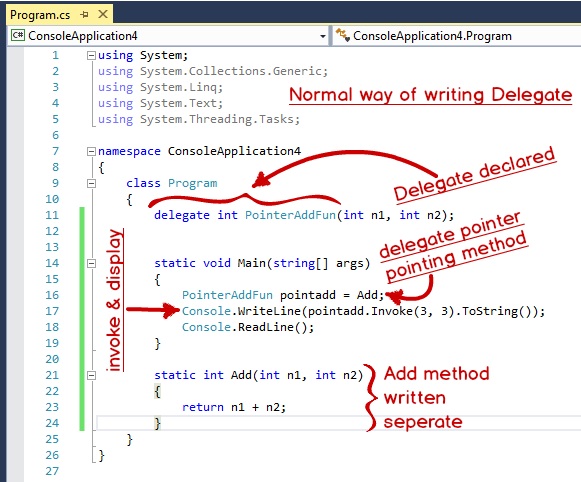 Now we have seen how to write both traditional written delegate and also seen how to code using Anonymous Methods.

It is the time to do comparison between both of the methods and check out which performs better.

Below image shown are the full steps: -

Once writing of code is completed then build the entire solution and click on ctrl + F5 on keyboard to execute and see the result.

On console prompt you will see the execution result time taken for each 10 loops and each loop executed 1000 times.

Since the results for anonymous methods are out now we will recode it. All steps are same as we have seen aboveonly need is to remove existing in line code delegate and create a separate Add method outside. Once the Add method is created tie it up with pointer delegate. Below is the code which should be written for pointing delegate to method

Result will be seen on the command prompt for normal delegate

We have taken results of both the methods and put it on the table in front of you for ease of comparison. From below table, result for anonymous method where we have inline delegate code shows less time to process the loop as compare to normal way of delegate where Add method is outside.

So it is better to use anonymous methods inline delegate code under the circumstances where we have small and simple methods instead of creating full overhead methods outside.

Secondly performance increases with use of anonymous methods as we have tested above and got the results.

This article is a small water droplet from the .NET knowledge of pond. There are many other important topics which are essential to become successful programmer here is the site which we would like to share questpond.com which is answer for almost all questions in C# and .NET programming.

Also below is a video from their latest C# 100 hrs series hope you will like it as a fresher: -

Thank you, for commenting !!

Step by Step Partial Classes and Partial Methods in C#.NET with example

Understand threading and types of threading in c# using an example